Tenant Leasing Illustrated – April 2019 – Late Delivery; A Landlord Should Always (Be Made To) Pay Its Debts

Sadly, with the Season Eight finale upon us, this will be the final Game of Thrones related Leasing Illustrated newsletter.

That is, until the inevitable sequel or prequel (or some “other-quel”).

Our various G.O.T. newsletters over the years have garnered our largest audience and volume of readership responses (not surprisingly, since why read this drivel without G.O.T. to keep you awake!).

For those living in another solar system for the past few years, G.O.T. is an HBO series regarding the battle among various families for the Iron Throne in the fictional kingdom of Westeros.

Why not? As Mel Brooks taught us years ago, “its good to be the king“.

And, yes, for those of you a little too caught up in the series, G.O.T. is fictional, (although based on certain fire-breathing landlords, I sometimes wonder).

Not that I for one am too caught up…

Okay, perhaps I have on occasion asked colleagues to introduce me as Alan Katz of the House Mintz, first of his name, the unclear, King of the run-on sentence … well, you get the idea.

And when burning the midnight oil proves necessary, I do sometimes recite the Night’s Watch oath… “Night gathers, and now my drafting begins. It shall not end until the lease is signed…”

At least life has become easier for my kids, who have found that the easy go-to dad gift is a goofy G.O.T. t-shirt (some recent options proudly worn shown below). 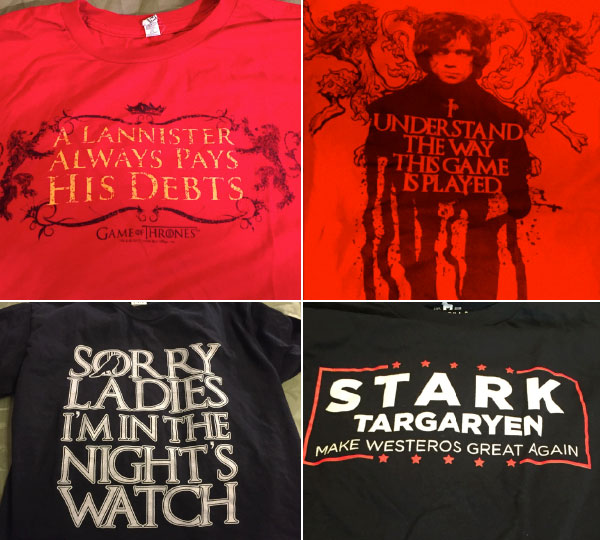 It is said that when you play the game of thrones, you win or you die.

Commercial leasing is not quite so easygoing and genteel, and in our more rough and tumble world there is often not much worse for a tenant or its leasing attorney than late delivery of the tenant’s newly leased premises.

Recently, a friend asked me to look at her relative’s new restaurant lease where the landlord was many months behind in completing its construction obligations. The lease included a termination right in favor of the tenant under certain circumstances, but this was not an effective remedy for a restauranteur who had already invested a good deal of time and money.

For other office or retail tenants, a landlord’s delay in delivery can also put the tenant in a costly holdover situation at its current premises.

In past newsletters we have looked at how to address a landlord’s failure to timely deliver premises but today focus on only one particular aspect of this dynamic.

Although a landlord may (correctly) point out that it already has a large incentive to deliver leased space and start receiving rent, the best way for a tenant to assure timely delivery of possession is by requiring additional abatement or “free rent” on a day for day basis in the event of late delivery.

Such additional per diem amount would be characterized as “liquidated damages”, i.e., an amount the parties designate for the tenant to collect in lieu of its actual damages as compensation for a specific breach.

It can, to say the least, be difficult on a tenant’s new relationship with its landlord to start a lawsuit over a delivery delay and it can be hard to prove damages for actual delay.

On the other hand, a contractual right to additional free rent becomes part of the business transaction and, if clearly understood and documented, is easier for both parties to accept.

Some landlords clearly responsible for significant delays will still ask their tenants to discount the extra free rent, and it is often a very smart “good will” gesture to agree to such a discount at the start of a long relationship with a landlord, but at least the tenant will be in the driver’s seat and potentially creating the basis for reciprocal cooperation from the landlord down the road.

These types of liquidated damages scenarios can come up for a tenant in other situations, such as when hiring a contractor to timely build out the tenant’s premises.

Remember that the battle of liquidated damages to enforce delivery is dark and full of terrors, so protect yourself by unsheathing the following six suggestions:

“If you think this has a happy ending, you haven’t been paying attention.” Ramsay Bolton

Undoubtedly, that is how many tenants feel when entering into a commercial lease and needing their new space delivered on time. And things did not work out so well for good old Ramsay (such a sweet fellow). But if you follow the six suggestions above, your liquidated damages provision will keep you safe and warm (after all, winter is coming). Valar Morghulis.