Although tenants struggle to obtain reasonable exit strategies for their commercial tenancies, some leases provide landlords with broad flexibility through a termination option in the event that the landlord decides to demolish, renovate or change the use of its building. The first drafts of these landlord termination options leave a lot to be desired in terms of providing protections for the tenant.

In today’s newsletter we discuss landlord termination options and provide ten suggestions to protect the tenant. 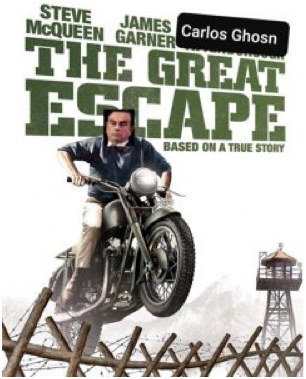 It is the most daring escape since Steve McQueen and crew hightailed it out of Stalag Luft III (or was that Stalag 13?).

Somewhere, Cool Hand Luke and Frank Morris each gave a nod of approval.

In a plot sure to become a Netflix production, Carlos Ghosn, billionaire former head of the Renault / Nissan / Mitsubishi alliance, escaped house arrest in Tokyo and landed in Lebanon, where he remains a beloved citizen, and which has no extradition treaty with Japan.

Ghosn was charged with financial misconduct but he claims that he cannot get a fair trial under the Japanese system which heavily favors prosecutors (he has already had to endure many days in solitary, interrogations without a lawyer, and worse, forced reading of lease subordination provisions).

“Team of operatives” is, of course, the same way people refer to their hiring of Mintz & Gold to handle a commercial lease.

Andy Dufresne would be proud!

The plot involved avoiding security cameras at Ghosn’s apartment, using a disguise to take a bullet train to Osaka, leaving Kansai International Airport hidden in a box that normally holds musical equipment, landing in Istanbul and switching to a plane that took him to Beirut.

Steve McQueen only had to find a motorcycle!

I am wondering if next vacation I can save on airfare if my wife brings me hidden in a guitar case.

On second thought, she might not let me out.

Landlords sometimes pull off their own version of the Great Escape through the use of a termination option in the event they decide to demolish, substantially renovate or change the use of their building (e.g., from retail / office to residential).

Often, these provisions provide the tenant with too little notice and meager compensation.

Do not let your landlord escape a la Mr. Ghosn without following these ten suggestions:

Just say no. First, attempt to delete the option entirely. This is not a standard clause and is generally not included in larger leases. You have negotiated for a specific term and your landlord should not be able to change that important aspect of the deal unless it was agreed upon up front at the term sheet stage (and do not agree to it up front at the term sheet stage!). If forced to accept such a termination right, follow the suggestions below.

Limit use. You should limit your landlord’s ability to invoke the termination right to its decision to demolish the entire building and then only after delivery to you of evidence of such determination (e.g., plans filed with the local building department). You may have to expand the scope of Landlord’s ability here a bit, e.g., if your landlord wants the right to convert the use of the non-retail portions of the building from office to residential use. Note: you may also want to require some additional liquidated damages payment if the landlord exercises the termination right but then, after you vacate, does not actually demolish or convert the use.

Notice, notice, notice. Give yourself plenty of notice to find alternate space and to move. The 180-day notice period often included in initial drafts should be extended out, depending on the market in which the space is located, to 18 to 24 months.

Provide a not before date. Even if you must agree to such a termination option, you should get some certainty and benefit of your bargain by providing that your landlord cannot exercise the termination option until some portion of your term has expired (e.g., until the sixth year of a ten year term).

Do not go it alone. You should require that all leases in the Building similarly situated be terminated as a condition to Landlord’s right to terminate.

Require compensation. You should be entitled to compensation for the inconvenience and direct costs of such termination. It is reasonable to require that your landlord cover your costs (e.g., for moving, unamortized cost of tenant improvements, new stationery (does anyone use stationery anymore?) or website revisions, etc.) and also pay a premium for your trouble. It is not unusual to require that your landlord pay you the equivalent of some months’ rent (e.g., six, nine or twelve) either as an upfront payment or as a credit against rent. If the termination date is a moving target, your landlord may require some sort of formula providing for a month of rent paid or credited for each period of months (e.g., twelve months) remaining between the termination date and the fixed expiration date. This amount will usually be applied against the final months of your lease term.

Cover defaults. Your lease may limit landlord’s obligation to make such payments in the bullet point above to your not being in default, but this should be limited to monetary or material non-monetary defaults and after the expiration of applicable notice and grace periods.

Address removal/restoration requirements. Most lease termination provisions provide that the lease will end on the early termination date as if such date were the expiration date under the lease, allowing certain obligations of both you and your landlord to survive, such as your obligation to remove improvements at the end of the term and restore the premises to some prior condition. But these are unusual circumstances not of your choosing and it is reasonable to require that notwithstanding any other provisions of your lease to the contrary that you have no removal/restoration obligations, even with respect to “specialty alterations” (i.e., alterations that are more difficult or expensive to remove, such as internal staircases and generators).

Delete indemnities. Many termination provisions require that you indemnify your landlord if you do not timely vacate, but unforeseen circumstances could delay your surrender. An indemnity could hold you responsible for large consequential damages so try to delete it if possible. It is better to have your holdover provision govern (usually some additional and perhaps increasing per diem liquidated damages penalty with any responsibility for consequential damages delayed for 60 to 120 days). And do not allow your landlord to provide that your failure to vacate allows your landlord to terminate the termination – you have at this point already made costly alternate plans.

Andy Dufresne: [in letter to Red Redding] “Remember Red, hope is a good thing, maybe the best of things, and no good thing ever dies.”

Hope also springs eternal in commercial leasing (and, yes, even when we are the attorneys). But if you follow the suggestions above, you will not allow your landlord too much hope that it can pull off its own great escape without providing you with adequate protection.